Tirunelveli Sodhi Kuzhambhu is a speciality of Tirunelveli in Tamil Nadu. It’s pet name is “Mappillai Sodhi”. “Mappillai” in tamizh means bridegroom. This dish finds the most prominent place in the menu when the groom visits inlaw’s house for the first time after marriage. Also Sodhi saapadu is a ‘must’ in all Tirunelveli marriages. It is the last day lunch of 2 or 3 day marriage, which is served on behalf of the groom’s side to the bride’s side and the guests. Perhaps as a return gift from the groom’s side? ?

It is a classic vegan recipe since it uses Coconut milk as main ingredient. Added with few selected vegetables cooked in coconut milk. It may raise the question, oh it’s just a stew of Kerala? No. What makes it different is the use of yellow mung dal. The addition of lentils and drumstick makes sodhi an uplifting dish different from Kerala stew. Also a dash of lime added once the sodhi is cooled gives an exotic palate to the dish. Initially, I was apprehensive about adding lime. I couldn’t accept that lime and coconut milk can go together. Also I have heard that many prefer the sodhi without the lime. But believe me, that final dash of lime gives a whole new twist to the dish. It was unbelievable. Do not miss it. ?

Firstly, traditionally, Sodhi kuzhambu uses only 4 vegetables. Potato, carrot, French beans and drumsticks. Though down the line many have innovated by adding other vegetables like peas and brinjal. So, you are free to exercise your options.

Secondly, many do not use garlic. But I felt, garlic adds an unusual aroma to the dish. Otherwise, its like a plain stew. Choice is yours anyways.

Thirdly, traditional recipe demands to cook the vegetables in thin coconut milk. However, I always prefer to steam cook my vegetables. Not only is it time and fuel saving but retains its nutritive value as well. Again, it is entirely your choice how you cook your vegetables.

Fourthly, in Tirunelveli, they always serve Sodhi with ginger pachadi. The idea behind is, since lot of coconut milk might be heavy on the stomach, ginger aids in digestion. I have already provided a recipe for Andhra style ginger pachadi. You can check.

Lastly, traditional Tirunelveli people extract coconut milk at home. Not once but thrice. This recipe uses thinner most, medium thin and thick coconut milks. Some of you might be hard up with time to go through that exhaustive and time-consuming exercise of making coconut milk at home. Particularly when it is freely available in the market currently. Hence it increases your choices. However, I give below both the options.

If you are extracting coconut milk at home:

If you are using store bought coconut milk: 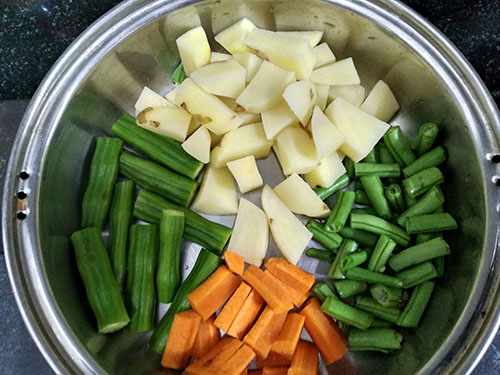 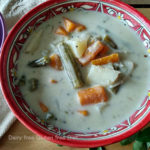 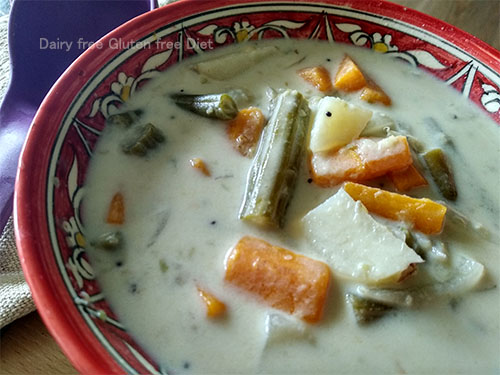