They say food brings cultures together. Idli from South India and Golgappa (Pani Puri) from North are two classic instances for this. These two popular snacks from two different regions, found entry into their counterparts’ cuisines and have become a favourite of all. Idli has become the most regular menu in most North Indian Restaurants. And you can find Gol Gappa /Pani Puri being the most sought after in street food stalls in South. Adding Gazpacho from Spain made this dish an international fusion. Thus was born Idli Golgappa Gazpacho.

For those who are unfamiliar, Gazpacho is a cold soup of raw, blended vegetables. A classic of Spanish cuisine, Gazpacho is widely eaten in Spain and Portugal, particularly during the hot summers, as it is refreshing and cool.

What made me innovate this Idli Golgappa Gazpacho?

I used to like pani puri, but only home-made. Those were the days before I realised I was gluten intolerant. Being a little finicky about hygiene, never ate those pani puris in street stalls. In the process earned the jokes from family for not being a sport. And how much I missed out.

Ever since I had to adopt the gluten free diet for around 4 years now, I have not touched home-made pani puris as well. Not wanting to miss out, firstly, I decided to make an innovation of this by substituting Puris with healthy Idlis.

Secondly made some tweaks in the pulses. I decided to make it healthier by adding sprouted red cow peas (red chawli / red karamani) instead of regular green Mung.

Thirdly, replaced pani in the Pani Puri with Gazpacho, the fresh vegetable cold soup. Of course Indianised it by adding chaat masala, black salt / rock salt and roasted cumin powder. I have strained the soup. However, if you do not mind the chunks, you can keep them. They do taste crunchy with idlis. 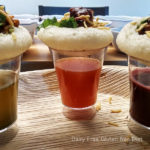 Scoop the idlis from the centre gently and make a dent. Mix the scooped out part with Flaxseeds Molagapodi (Gun powder), and keep aside.

Sauté the cooked peas with onion and tomato for a few minutes. Switch off and add the sweet chatni.

I have strained the soup. However, if you do not mind the residue, you can keep them.

You can also check: