Ginger Biscuits / cookies are globally most popular as a snack. Typically the base is glutenous wheat / processed flour. But These Ragi Ginger Biscuits are a healthier version using Finger Millet (Ragi).

In the United Kingdom, Australia, and New Zealand and most of the former British Empire, they call it ginger nuts. In the United States, the usual term is ginger snaps, and they are generally round drop cookies, usually 1⁄4 inch thick, with prominent cracks in the top surface. 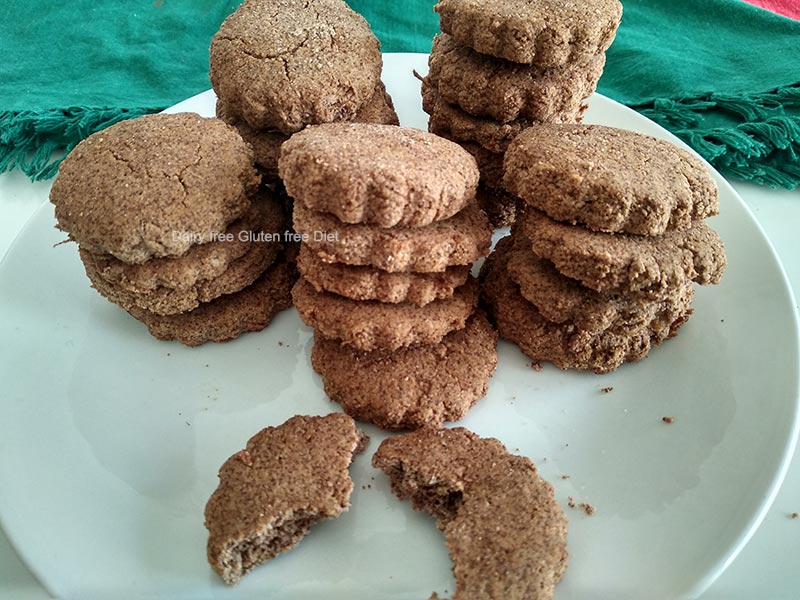 Ginger has been a traditional remedy in most cultures across the globe for thousands of years. Therapeutically, Ginger provides a variety of vitamins and minerals. The best part about ginger is that it you can consume it fresh, powdered, dried as a spice, in oil form, or as juice. In our house Ginger is a ‘must ‘ in Tea. For us, tea means ONLY GINGER TEA. Period.

What is significant in this Ragi Ginger Biscuits?

1. Firstly I have used Millet flour making them healthier.
2. Traditional ginger biscuits / gingersnaps use butter and molasses for the softness and sweet. As my practice, I have replaced butter with Homemade Apple sauce. However, you can use butter (equal quantity) if you prefer.
3. As molasses are not common in India, I have used our traditional organic jaggery powder instead of making it as a syrup.
4. Traditional cookies also use cinnamon powder. But as the star of the show is ginger, I have reduced the cinnamon quantity and increased ginger quantity.

Lastly, There are 2 ways of making these biscuits. Firstly, You can take small balls of the dough and flatten them. Or you can roll the dough between 2 parchment sheets and cut with any sharp lid or cookie cutter. However, I have used the latter method to make even sized biscuits just like store bought ones.  Since every oven is different, you have to adjust the baking time to get crisper biscuits.

Try these homemade Ragi Ginger Biscuits. This recipe uses simple ingredients that are always available at all our homes. They make an excellent snack with your hot tea / coffee on a cold winter evening. 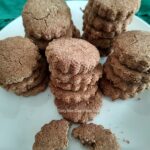 Ginger Biscuits / cookies are globally most popular as a snack. Typically the base is glutenous wheat / processed flour. But These Ragi Ginger biscuits are a healthier version using Finger Millet (Ragi). I have used standard measuring cups here. 1 cup = 250 ml