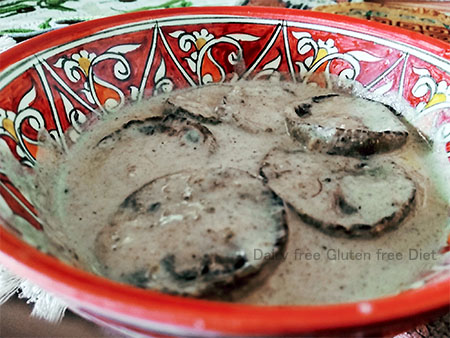 Many consider lauki (dudhi / ghia / bottlegourd / suraikkai) as a boring vegetable. From the valley of Kashmir comes this Kashmiri Al Yakhni, an interesting dish made from boring lauki cooked in curd with added spices that lend an unique taste to this dish.

Kashmiri cuisine mostly favours Non-veg dishes. Originally Yakhni is one such, using meat cooked with various spices. But over the years it has gone on to include even vegetarian versions like Paneer Yakhni, Lauki ki Yakhni, Lotus root yakhni, etc.

Lauki ki Yakhni in general avoids onion and garlic as Kashmiri Pandits never used them in their cooking. One more uniqueness of this dish is it never uses Tomato & turmeric powder. It uses curd instead. Its well known that most of the North Indian dishes are never complete without onion, garlic, turmeric powder and tomato. Yakhni stands apart in this respect. Kashmiri cuisine also liberally uses saunf powder and dry ginger powder. This dish is no exception. These add a subtle flavour to this recipe.

While the original authentic recipe demands deep frying the vegetable, I have avoided that step here. Just roasted the bottlegourd pieces in a cast iron pan as we do Baingan / brinjal. Also by default, I used the peanut curd in place of dairy curd.

Here is Kashmiri Al yakhni,  the boring lauki made interesting with a dash of Kashmiri spices and dairy free curd to give it an unique flavour & texture. 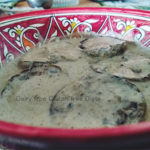 You can try this recipe with Brinjal as well.
Share on:
WhatsApp