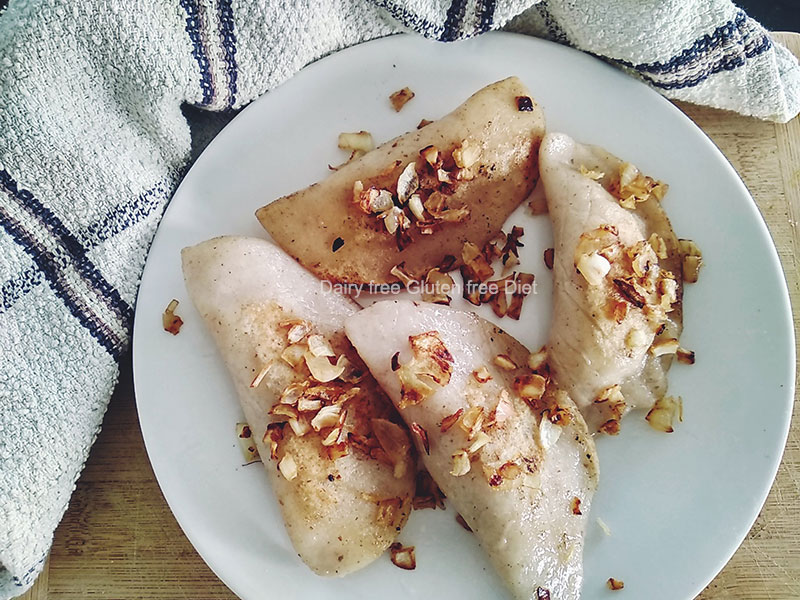 Pierogi (pronounced as perogi) is a popular dish native to Poland. Polish documents as early as the 17th century talk about Pierogi. It is a savoury dumpling that has crossed its boundaries and has become popular world wide. Homemade Pierogi form an important part of Christmas celebrations in many homes in Poland. But pierogi is not limited to celebrations. Polish enjoy pierogi all through the year.

Recently I was introduced to this dish by a Polish family friends. When I asked them for some polish recipes for my blog, they said most polish dishes are meat based and hardly any vegetarian dish. But this is one dish that is most flexible. Though popular filling for pierogi is potato, they can be stuffed with many savoury as well sweet fillings including sauerkraut, spiced meat, berries, etc.

For us Indians, dumplings are not new. Pierogis are close cousins of Momos of North East India and Modaks of South and Western India. Each of them has their own variations, though basically they are all dumplings. While you steam momos and modaks, pierogis are cooked in boiling water and sautéed in butter. 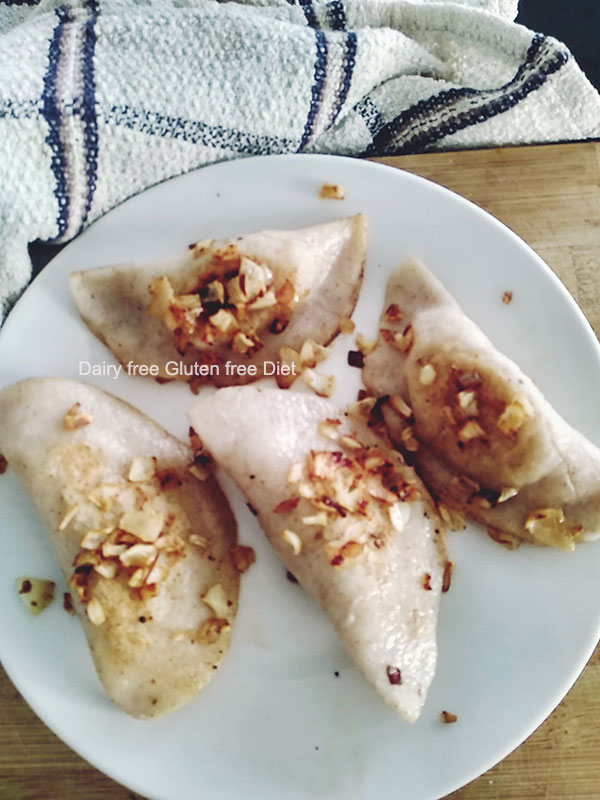 Firstly, traditional pierogi uses all purpose flour (maida) which makes it easier to roll. But making pierogi with a gluten free flour was a challenge. I failed in my initial few attempts. The pierogi was hard and tasteless. After few attempts I finally cracked a gluten free flour mix that was easy to roll and the pierogi turned out soft. Also, for that extra softness, I used just a tablespoon of almond flour made from almond pulp.

Secondly, traditional Polish roast the cooked pierogi in loads of butter. I had to compromise here. I roasted them in cast iron pan, that was just brushed with oil.

Thirdly, pierogi uses egg for binding the flour whereas I have used psyllium husk for binding. Instead of sour cream, I used thick non-dairy yoghurt.

Lastly, traditional pierogi uses Farmers’ cheese along with potato for the filling. Though lately, people have started using processed commercial cheese. However, I have used Ricotta cheese made with almond milk. Will post the recipe soon. But if you are a non-vegan, you can very well use paneer (cottage cheese).

Best part is you can freeze the boiled pierogi in zip lock bag after cooling them to room temperature. And thaw them and sauté just before serving. In the West, frozen pierogi is available off shelves. Present days, people prefer to buy them for want of time to make them at home. True, homemade pierogi takes time to prepare and needs that extra effort. But, if you have prepared momo or modak already, making pierogi is cakewalk for you. Trust me, these are so delicious and addictive.