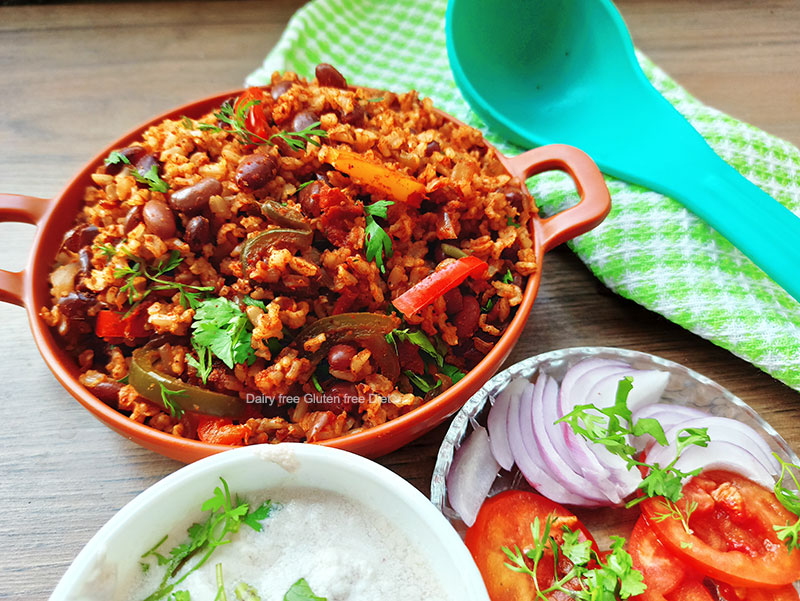 Tawa Pulao is a famous Mumbai street food. The street vendors cook veggies with pav bhaji masala and other spices in a huge tawa in which they cook Pav Bhaji and mix it with rice. That is the reason it’s called Tawa pulao. This pulao is quite prevalent in Mumbai and you can find it in in most pav bhaji outlets.

What is special about Tawa Pulao?

So what makes this Tawa Pulao so special you may ask. The answer lies in the fact that the vegetables maintain their crunchiness and the red kashmiri chilli powder lends an awesome red colour to the dish. Pav Bhaji masala is the key ingredient & a must in this recipe. That is what gives it a very typical street style flavour. It is interesting to watch how the street vendors make this pulao. They sauté the veggies as they do for Pav Bhaji, keep it on the sides of the tawa, bring a part of it in the centre of the tawa and mix it with cooked rice. The final output is the fusion of Pav Bhaji and Pulao. As we, home cooks, do not generally own such big tawa, we can make this in a frying pan. We still have the liberty to call it Tawa Pulao.

To make it healthier, I have used Rajma as the main ingredient. And also brown rice. However, you are free to use any rice of your choice. But a word of caution. Do not use Basmati Rice for this recipe. Because of its overwhelming flovour. You can even use left over rice.  Some of the best Rajma is said to be grown in Nepal and Jammu regions. The ones grown in Jammu region are smaller in size than most rajma grown in plains and have a slightly sweetish taste. Rajma is full of potassium, magnesium, iron and protein and hence is a good meat substitute for vegetarians. In order to make Rajma keep the centre stage, I have added very few vegetables such as coloured bell peppers just to add colour and crunchiness to the dish. You can check for my recipes for other pulao here

Serve this healthy Rajma Tawa Pulao with any raita, papad and a green salad.